What are Esophagael Problem Signs? 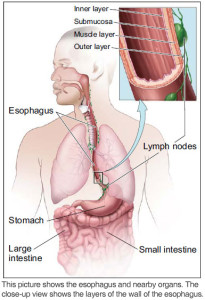 Esophageal tumors usually lead to dysphagia (difficulty swallowing), pain and other symptoms, and are diagnosed with biopsy. Small and localized tumors are treated surgically with curative intent. Larger tumors tend not to be operable and hence are treated with palliative care; their growth can still be delayed with chemotherapy, radiotherapy or a combination of the two. In some cases chemo- and radiotherapy can render these larger tumors operable. Prognosis depends on the extent of the disease and other medical problems, but is generally fairly poor.[2]

Dysphagia (difficulty swallowing) and odynophagia (painful swallowing) are the most common symptoms of esophageal cancer. Dysphagia is the first symptom in most patients. Odynophagia may also be present. Fluids and soft foods are usually tolerated, while hard or bulky substances (such as bread or meat) cause much more difficulty. Substantial weight loss is characteristic as a result of reduced appetite, poor nutrition and the active cancer. Pain behind the sternum or in the epigastrium, often of a burning, heartburn-like nature, may be severe, present itself almost daily, and is worsened by swallowing any form of food. Another sign may be an unusually husky, raspy, or hoarse-sounding cough, a result of the tumor affecting the recurrent laryngeal nerve.